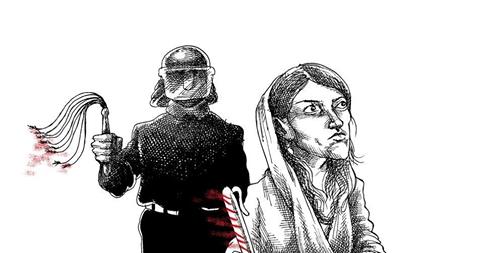 Marzieh Rasouli journalist is to Evin prison in Tehran since July 8 to serve his sentence of two years in prison. She was also sentenced to fifty lashes. DR
Marzieh Rasouli journalist is in a Persian proverb “a book worm”, in others a passion for reading words. Since Tuesday, July 8, that Iran is at the notorious Evin Prison in Tehran, where she must spend the next two years. In his prison sentence also adds a sentence to fifty lashes.

The purpose of the Iranian Mana Neyestani on confirmation of the conviction of the journalist Marzieh Rasouli, to fifty lashes. Marzieh Rasouli was convened on July 8, at Evin Prison in Tehran, to serve his sentence of two years strong.
Drawing Iranian Mana Neyestani.
The charges, as explained on his Twitter account this cultural journalist “propaganda against the regime” and “disturbing public order by participating in demonstrations.” The latter charge refers to protests born following the controversial re-election of Mahmoud Ahmadinejad in June 2009.

Marzieh Rasouli is also a blogger. His writings are distinguished by their humor, a quirky look and direct way, making the economy of false courtesy, in total contradiction with the hypocrisy of some Iranians.

This former collaborator reformist dailies, including Etemaad and Shargh, was arrested for the first time in January 2012, for six weeks, for collaborating with the BBC Persian channel, broadcast in Farsi from London, considered subversive by the Iranian authorities.

With her were also arrested two other journalists, Parastoo Dokouhaki and Sahhaméddin Borghani. Confessions obtained under pressure, have been released after bail in a film to expose their subversive activities. Marzieh Rasouli was sentenced to two years in prison and fifty lashes, and Parastoo Dokouhaki to six months imprisonment.

On his Twitter account, Marzieh Rasouli wrote on 7 July that during a phone call the Tribunal Penal Enforcement of Evin prison, she learned the confirmation on appeal from his conviction. Yet she argued to have not received the official letter stating the verdict.

The application of such a sentence abruptly occurs while another journalist Reihaneh Tabataie was also convened at Evin, June 21, to serve a sentence of one year in prison. Another young journalist Saba Azarpeyk, she was arrested on May 28 and has been undergoing interrogation to a new judicial record made against it for “propaganda against the regime”. His lawyer announced in early July that his temporary detention was extended by one month.